Putting EFB to the Test: Key Results You Need to Know

EFB Test Results: How does an EFB compare to other premium flooded battery options?

Batteries play an increasingly critical role in vehicle performance as carmakers continue to add more electronic safety and convenience features. This is even true for electric vehicles where lead batteries work alongside the lithium drive battery to power onboard electronics such as instrumentation and entertainment features.

The good news is that battery manufacturers have recognized these changes, producing a variety of advanced lead batteries such as Absorbed Glass Mat (AGM), Enhanced Flooded Batteries (EFB) and improved flooded batteries to address these growing power demands. With so many battery technologies on the market, choosing the right battery is more complex than ever before. Understanding the performance capabilities of each of these battery designs can make the battery selection process easier for consumers.

We’ve seen that EFB has the performance capability to unseat AGM as the battery of choice for vehicles with advanced power needs. But how does an EFB compare to other premium flooded battery options?

The testing subjected samples of each battery type to the SAE j2801 cycle life test and EN50342-6 17.5% depth of discharge (DoD) cycle life test respectively. For reference, SAE j2801 is the industry standard high temperature (75°C) life cycle test for SLI batteries and is designed to mimic battery usage in a standard vehicle application. The EN-50342-6 / 17.5% DoD is a standard partial state of charge and micro cycling life cycle test focused on Start/Stop and vehicles with additional power demands. Including the partial state of charge testing in the comparison was intended to better address the changing power needs of modern vehicles.

For start-stop systems, the battery provides the electrical energy to support vehicle functions during the stop portion of the drive cycle. For this system to work properly, the battery must be resilient during partial state of charge cycling, as well as have an enhanced charge acceptance capability. Although not a failure in the traditional “need for replacement” definition, a battery can fail to support the stop-start functionality.

EFB Test Results: Not all “premium” batteries are the same 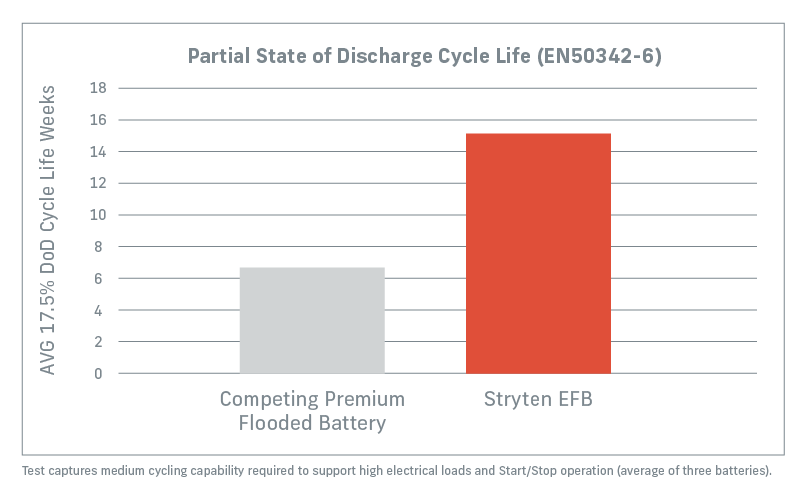 The EFB test results also showed that the EFB has a more robust alloy, which yielded higher heat tolerance at a lower thickness than the competing premium flooded battery as evidenced by the equivalent SAE j2801 life test results. And while the competing premium flooded battery improves upon the high-temperature life aspect compared to standard flooded type SLI designs, it does not address the cycling failure modes or Start-Stop functionality, whereas the Stryten EFB does as seen in the EN50342-6 results.

As vehicle power demands continue to evolve, choosing the right battery will become even more important. While battery manufacturers have taken different approaches to address the changing market, third-party testing confirms that not all premium flooded batteries are capable of delivering performance at the same level. Stryten Enhanced Flooded Batteries are designed from the ground up to meet the needs of modern vehicles by combatting the fastest-growing causes of premature battery failure.