The circular economy of the U.S. lead battery industry is a model for other industries working toward the sustainability of their manufacturing, distribution and recycling processes. This emphasis on recycling and reusing raw materials as much as possible is aligned with the nation’s goal to transition to renewable energy and reduce our impact on the environment.

As the world transitions towards more clean energy sources, we wrestle with the need for reliable storage for the renewable power generated. Advanced lead battery technology is one of the solutions, with a long history of safety, dependability and sustainability. 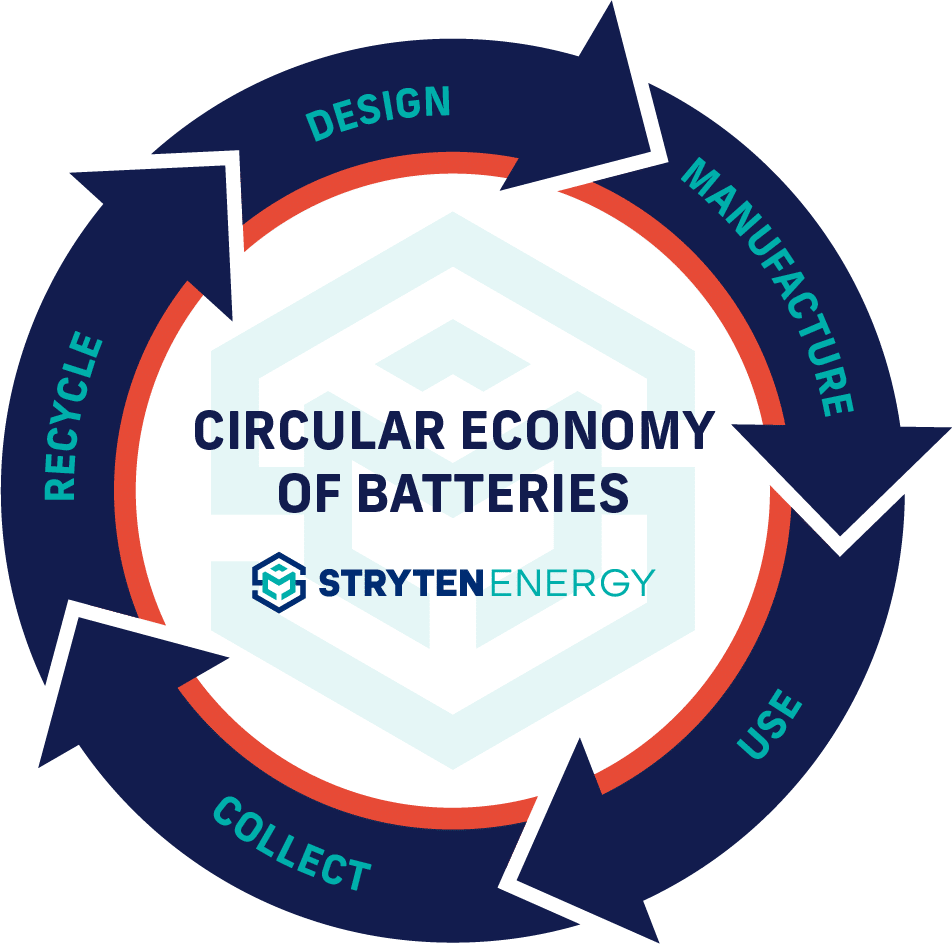 It’s sometimes difficult to determine where to begin in a closed loop system, but for lead batteries, recycling is the best starting point. Through a network of retail stores, service and distribution centers, spent batteries are collected, sorted and transported to recycling facilities for processing.

In addition to the lead, the plastic casing and the electrolyte in a battery are also recycled. The polypropylene plastic and other casing materials are crushed into small pieces, melted for recycling and molded to make new battery casings. Used battery electrolyte is processed into sodium sulfate, which is used in laundry detergent, glass and textile manufacturing.

A new lead battery produced in the U.S. is typically comprised of more than 80 percent recycled raw materials. In addition, 90 percent of batteries used in the U.S. are manufactured domestically, making lead batteries a readily available energy storage solution for consumers and commercial applications.

Sourcing is a key component of manufacturing. In order to minimize the environmental impact, having a domestic supply chain is preferred. Lead battery manufacturers have a readily available supply of polypropylene, silica and electrolyte, courtesy of a robust recycling program. For U.S. battery manufacturers, most of their products are made from domestically sourced raw and recycled materials.

New mining of lead supplies only a small part of the materials needed. The U.S. has abundant natural deposits of lead, along with an established, environmentally responsible mining industry to meet future demand. Lead can be continuously reused without losing any future performance capacity, which means essentially 100 percent of the lead in a spent battery is recyclable.

The U.S. is one of the leading producers of lead in the world. Even though the vast majority of lead mined in the U.S. is exported, these resources could be redirected for our growing domestic battery manufacturing needs. While lead is considered an essential commodity by the U.S. government, it is not included on the list of minerals critical to national and economic security. Trade associations are calling for the government to designate lead a critical mineral as advanced lead battery technology provides reliable energy storage for renewable power supply and emergency power for critical infrastructure.

This robust domestic supply allows lead battery manufacturers to avoid many of the difficulties of lithium battery manufacturing. Without a well-established recycling process, these manufacturers rely heavily on raw materials, mainly lithium and cobalt, imported from other countries. China controls 80 percent of the global lithium raw material refining. By weight of comparison, the U.S. produces less than 2 percent of the global lithium supply, despite holding 17 percent of global reserves.

Extracting the raw materials also requires large quantities of energy and water, as well as the time, money and fuel consumption involved in importing those resources. Investing in the development of a responsibly mined domestic supply of lithium is a necessary step to lessen the environmental impact of our nation’s transition to clean energy.

This highly developed and mature manufacturing system brings economies of scale. With more than a century of expertise in manufacturing, distributing and recycling, domestic companies are well-positioned to establish U.S.-based, closed loop manufacturing of lithium batteries. Government incentives can help organizations further build out their lithium battery manufacturing and assembly facilities. It would be in the interest of national security to have sensitive technology, such as military equipment, battery management systems and grid-scale battery storage solutions for renewable energy, designed and built in the U.S., rather than relying on components developed by a potential foreign adversary.

Harnessing the power of renewable energy will require a variety of battery technologies, which will include advanced lead, lithium and vanadium solutions.

Domestic mining operations, along with strategic partnerships with close allies, will provide the necessary rare earth minerals and minimize reliance on China. Grants and other government incentives will allow U.S. companies the opportunity to construct and operate lithium battery manufacturing and assembly facilities. Recycling capabilities will reduce the constraints of scarce raw materials and support a more secure and circular domestic supply chain.

As our domestic lithium battery manufacturing progresses, we must leverage the strength and stability of the lead battery industry. This circular economy minimizes waste, helps protect our environment and ensures abundant supplies of lead and plastic to produce new batteries to provide reliable energy today and into the future.