Power and Cycle Life for Batteries in Military Vehicles 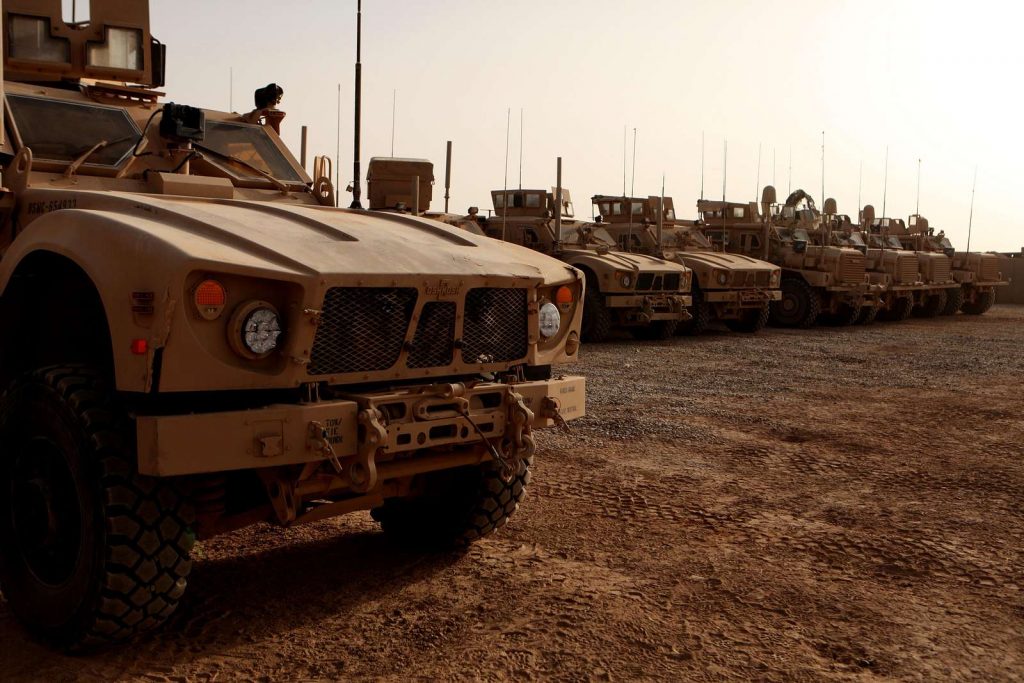 The variables of power and cycle life are important in all battery applications, but batteries in military vehicles have very specific, often mission-critical, needs in terms of those two key factors.

Military vehicles have increased power output from the alternator to accommodate higher loads. But running the engine uses precious fuel and increases the chance of being spotted due to increased thermal signature, or simply because of the noise of a big diesel engine. Running a fuel-powered Auxillary Power Unit may be an option in some situations, but that scenario still creates thermal and audible signatures while further increasing vehicle maintenance needs and downtime.

Consider an example of a 50-amp load, which would be fairly light for a military vehicle by today’s standards. Using current lead battery technology, this load can only be supported for about 30 to 45 minutes, and the battery still needs to be able to start the engine. Draining a lead battery below 50 percent state of charge (SOC) significantly diminishes the battery’s life, but with no built-in battery monitor, knowing the SOC or general health of a battery quickly becomes guesswork.

A standard lead battery is designed for starting and can perform thousands of engine starts. Deep cycling runs the battery down and reduces its cycle life. The cycle life of a battery is determined by how often and how low it is discharged. It is never recommended to run a lead battery below 50 percent, as life cycle is significantly reduced.

The chart below gives a general overview of cycles versus depth of discharge (DOD). Engine starting is a low DOD application at 10 to 20 percent, which can result in a long cycle life. But Silent Watch applications are a true test of DOD, requiring 80 percent or more of the battery capacity to be used on a regular basis. As you can see, batteries in military vehicles require a high depth of discharge capability. 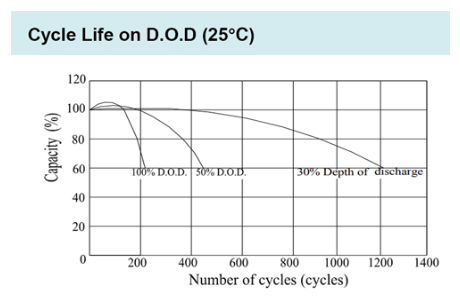 This chart compares the SOC remaining with a 60-amp load for lead and lithium batteries: 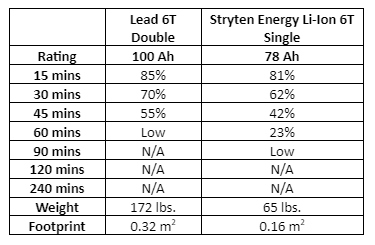 Typically, lead batteries only last a month or two without a charge being maintained, but that can easily be handled by periodically starting the vehicle, or by trickle-charging the battery while in storage. For batteries in military vehicles that are in the field, however, that type of maintenance is challenging, as there may not be enough trickle chargers on hand to maintain a large fleet or to start each vehicle every few weeks.

In addition, it is difficult to know the remaining charge of a lead battery. Techniques such as coulomb counting are possible but inaccurate due to the highly variable charge and discharge efficiency of lead batteries, which can result in a more than 50 percent capacity error after just one charge. A lead battery could be dead or not fully charging, but a soldier might not know that until they are stranded in a dangerous situation.

A Closer Look at Lithium Batteries

Lithium-ion battery systems are “smart” systems with electronics that monitor a battery’s state of charge (SOC) and know when it needs a charge. The high efficiency of the cells allows accurate coulomb counting with a capacity and health measurement error of 2 percent or less.

The Battery Management System (BMS) is critical to the safe usage and long life of a lithium battery. However, the BMS is also one of the reasons lithium is typically more expensive than a lead battery. With 6T lithium-ion costs running five to ten times the cost of lead, replacement will happen slowly, but one lithium battery can replace two to three lead batteries.

One of the issues facing the replacement push is the desire for a drop-in replacement. Ideally, a user could remove a lead battery and drop in a lithium battery. While this is theoretically possible, it is not the optimum use of an expensive product.

One issue to consider is using an old alternator. Without an alternator that “talks” to the battery and provides the best charging opportunity, a lithium battery will not have the expected lifespan. Some very large alternators will try to over-charge the battery, which can cause the battery’s safety systems to shut the battery off or lead to a build-up of high temperatures inside the battery. These issues must be addressed before a true drop-in solution can be determined.

The next blog in our series will examine the safety of batteries in military vehicles and other applications.