Dynamic discharge acceptance was an important component of a recent study. The study compared the performance of Stryten’s Enhanced Flooded Battery (EFB) technology to other battery solutions available in the North American market, including standard flooded and Absorbed Glass Mat (AGM) batteries. The results are a key predictor of the bright future ahead for EFB technology in the U.S. automotive market.

The test compared batteries when they were in fully charged (Ic) and partially discharged (Id) “static” states following a 20-hour rest. Another test was performed after a third sequence meant to represent a one-week real-world drive cycle at 80 percent SOC (Ir). Results from these three different measurements were then analyzed to produce an amps/AH figure of merit. (see graphs below)

Both EFB and AGM yielded higher DCA values over a standard battery, but AGM offered superior charge acceptance in the fully charged and discharged static sequences of the test. The higher current input is partially driven by the inherent recombination reaction in AGM as it reaches full charge. Although this recombination reaction is integral to non-spillable AGM operation, the added current does not materially impact material conversion and battery capacity return.

The test also showed EFB performed equal to AGM in the real-world drive cycle segment in which full SOC is not achieved and the recombination current input is not significant, meaning active material charge recovery (SOC) is equal if not better with EFB than AGM. In an operational environment, increased charge acceptance means the battery will be ready for the next stop-start event. 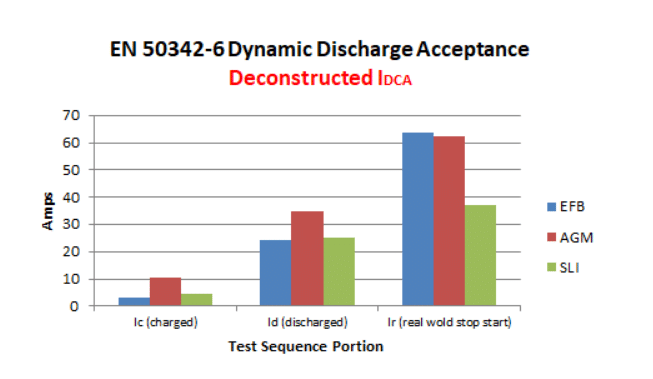 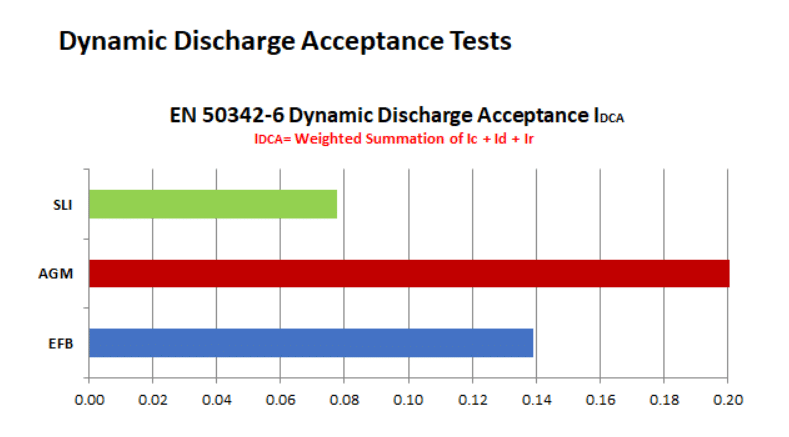 Next, the study addressed each battery’s response to the 50% Depth of Discharge (DOD) test, which is the industry standard for characterizing the deep discharge cycling capability of a battery. While most vehicle applications do not experience frequent instances of deep discharge, this result can also be used to measure the total potential realizable energy available in a battery.

AGM has traditionally offered an advantage in deep cycle applications of 50 percent and above due to its electrode compression qualities, but EFB was able to yield at least 80 percent of the AGM cycle life in the 50% DOD test. Because of its deep-cycle capability, AGM is usually the technology of choice when a battery is used as the primary source of energy, such as powering 12V or 120V accessories.

However, EFB can be very competitive when the financial value is a consideration. The study clearly demonstrated both AGM and EFB can provide significantly more deep cycle life capability than the typical standard battery.

The 17.5% Depth of Discharge test is the industry-standard method for characterizing the ability of a battery to operate in a partial state of charge (PSOC). With this test, a battery’s mid-depth cycling and cycle-to-cycle recharge capability can be measured.

PSOC operations are common in stop-start applications, as well as standard battery applications with heavy electrical loads in a stop-and-go commuting environment when a battery is supporting the alternator output.

The study showed an EFB battery can yield ten times the amount of cumulative energy output (AH) as a standard battery, which suggests a significant benefit when using EFB in more demanding applications. EFB also fared well against AGM on this particular test. Over an 18-week analysis, the total average capacity output of EFB was 50 percent greater than AGM for an equally sized battery, indicating EFB can not only yield as many cycles as AGM but also can hold its total capacity at a higher level without decay. 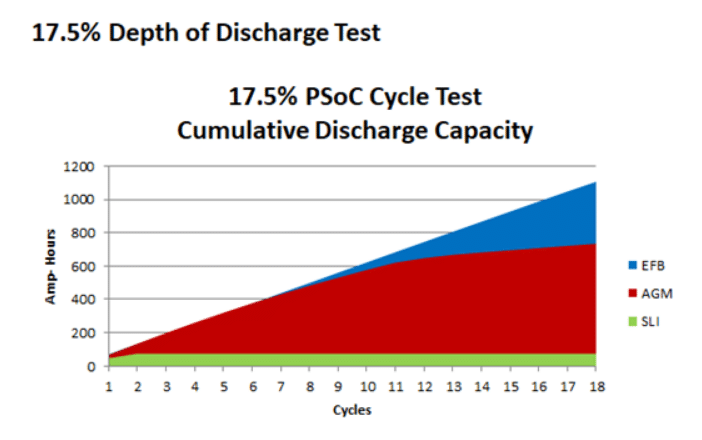 A primary cause of failure in AGM technology is thermal instability, which leads to water loss, particularly in hot climates. This lack of thermal stability limits the lifespan of AGM batteries, and the full value of these batteries is never truly realized.

This flaw is recognized by U.S. military officials, who have incorporated an overcharge and thermal runaway test into their AGM test protocols. During this test, a battery is forced to accept as much current as possible until the energy absorption rate collapses and the battery is no longer functional. The main cause of failure for this test is a significant increase in battery temperature and eventual water loss.

When this test was run at 50°C, which represents a reasonable but not extreme under-hood temperature, EFB technology was able to mitigate the associated temperature increase and absorb 52 percent more energy than a comparable AGM battery before collapse. This result indicates an EFB should last 52 percent longer than an AGM battery in high-temperature operational environments before thermal stability and water loss failure are realized. 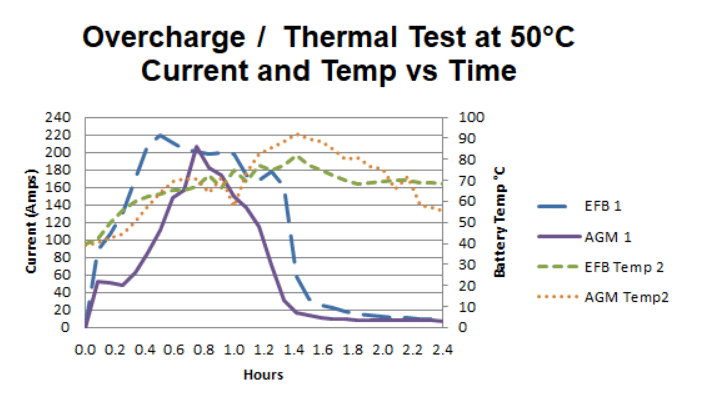 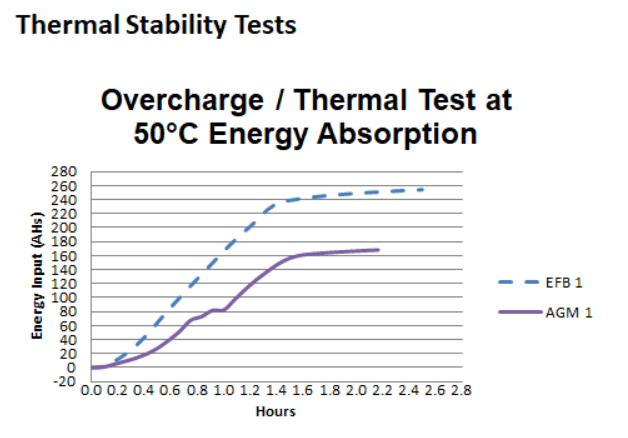 Some of the study’s highlights:

Based on the results of this study, EFB technology is poised to bring significant benefits to the U.S. battery market, by offering a new choice for customers who want options beyond standard flooded or AGM batteries.