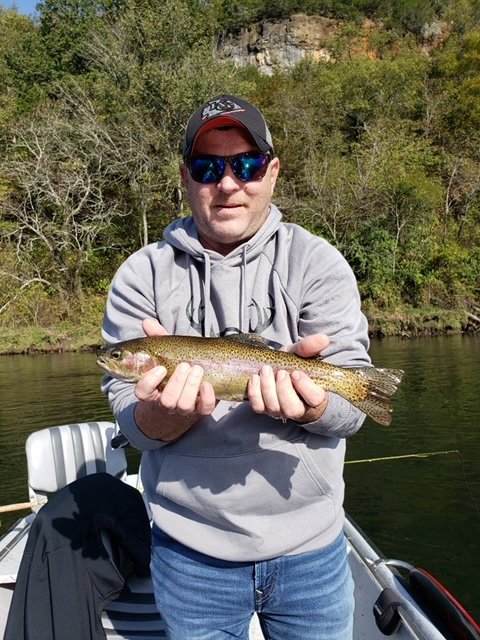 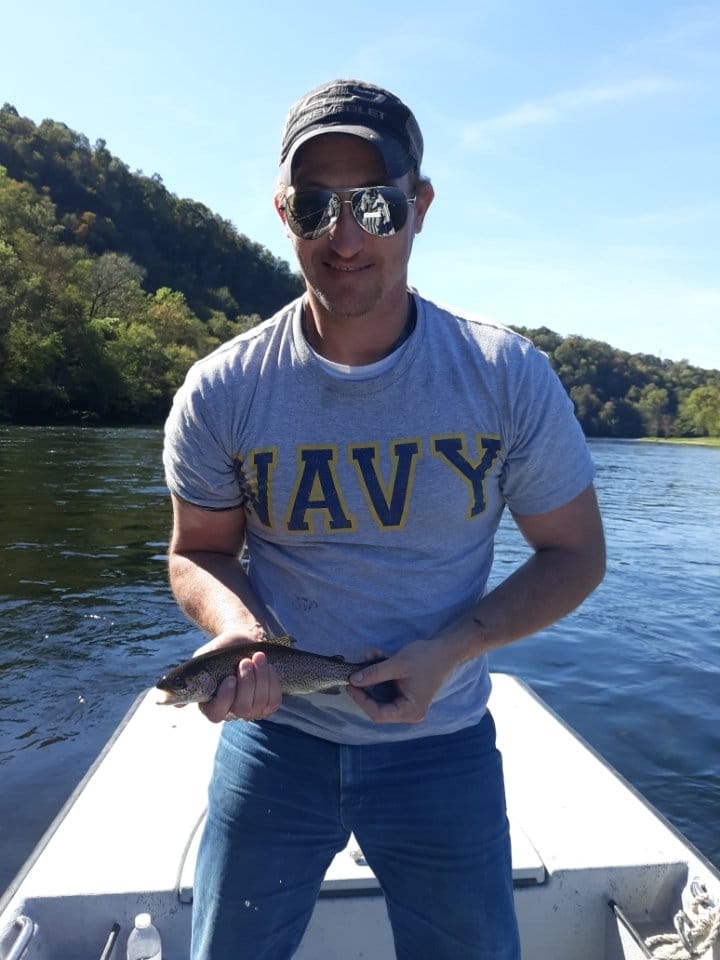 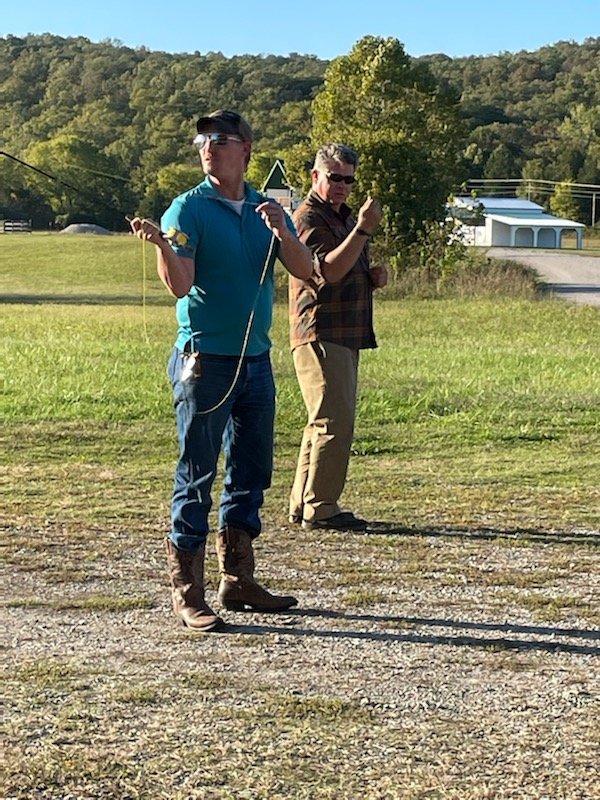 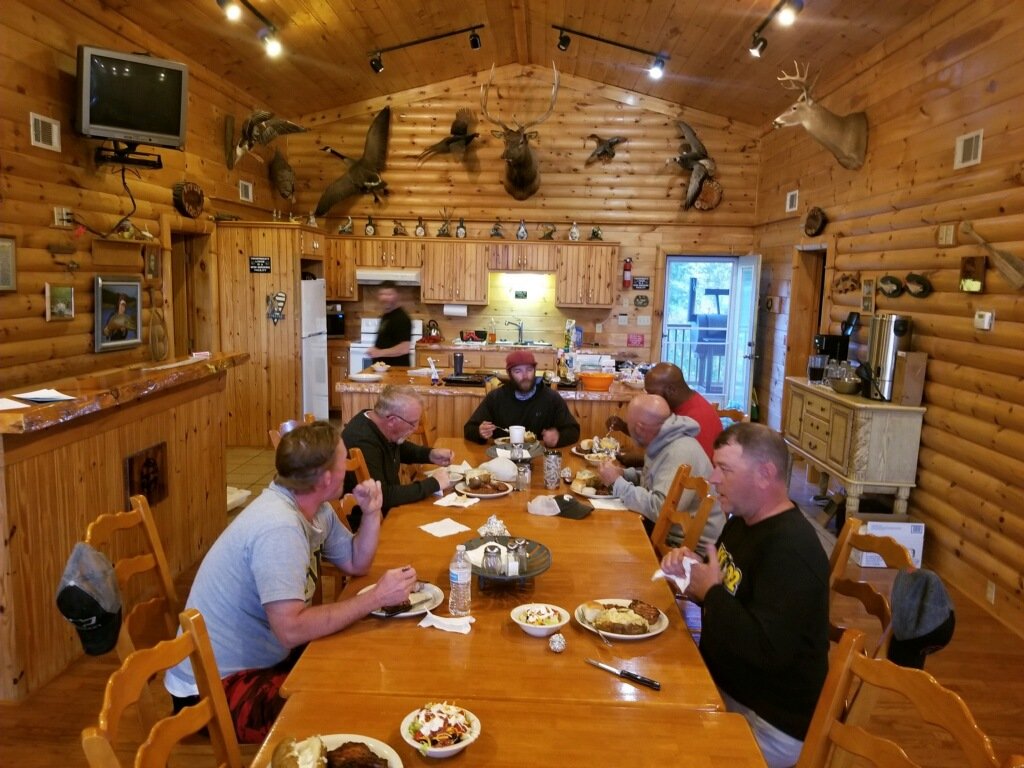 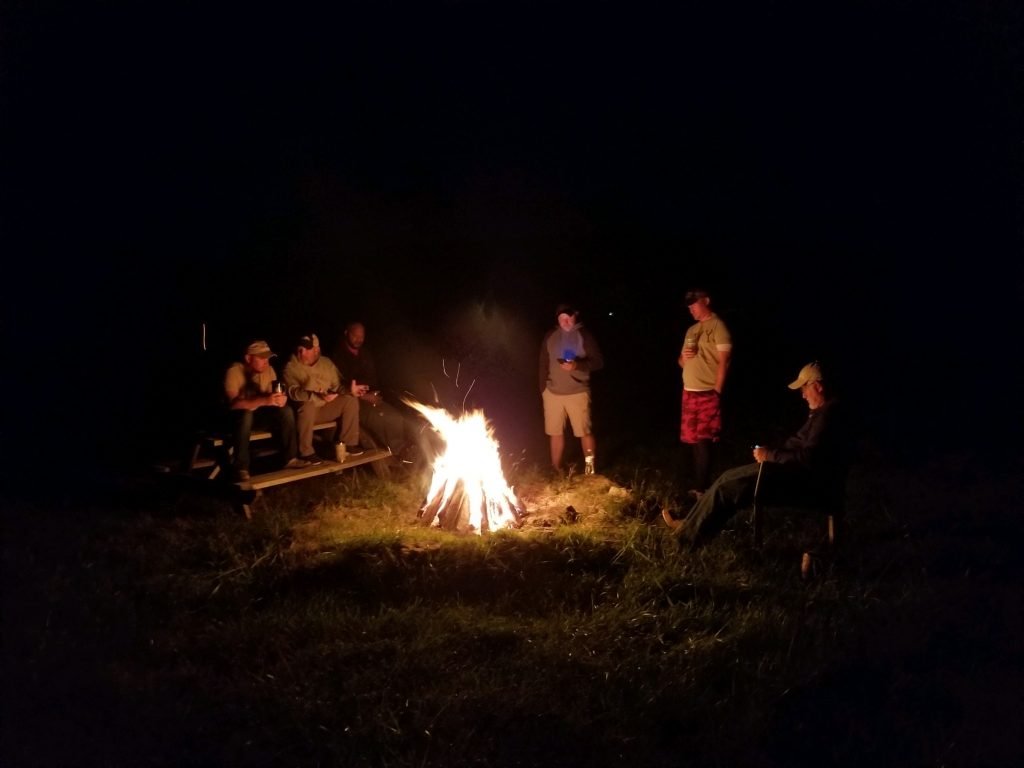 Winding through the Ozarks, the White River in Cotter, Arkansas, recently provided a place of renewal for a group of military veterans. Two Stryten Energy employees, who are U.S. Navy veterans, participated in the three-day fly fishing expedition planned by the Rivers of Recovery organization.

The trip started with arrivals and settling into the cabins. For those new to fly fishing, instruction was provided by the trip leaders, Keith and Levi.

“I will admit that I was very nervous about fly fishing,” said Chad. “There’s a lot of line flying around with that type of fishing, but after some help from the trip leaders, I was able to get it. It’s not as hard as it looks.”

The lessons paid off as Chad and Cody went on to catch more than 20 fish each over the next two days. Cody also made an unexpected catch.

“I had something on my line that I thought for sure was a really large fish,” described Cody. “I fought it and was able to bring in a really nice piece of moss.”

You can’t have a good fishing trip without really good food, right? The “Shore Lunches” put on by the Rivers of Recovery staff were one of the highlights of the trip, said Chad and Cody.

“We all got on the river by 8 a.m.,” said Chad. “At noon, all four boats came together at a specific shore area where the staff had set up an outdoor kitchen and tables. They cleaned our fish and fried them up right there, along with homemade hush puppies. It was amazing.”

While the three-day trip included lots of fishing, the time spent at the dinner table and around the bonfire was a big part of the experience, according to Chad. “Hanging out with fellow veterans and talking about our experiences in the military was really cool. Since I was on the water during my years of service, it was interesting to hear from the Army guys about their experience on land.”

“It was an amazing group of guys,” said Cody. “Everyone was so welcoming and we all were made comfortable from the minute we arrived. As veterans, we had an instant bond. Sharing stories around the campfire and relaxing together was so meaningful. It’s hard to describe, but these moments spent with other veterans means so much.”

Cody served in the U.S. Navy from 2005 to 2009. In 2008, he was part of a joint task force with the U.S. Army on a mission in Afghanistan. He joined Stryten in April of 2019 and is often referred to as the “problem solver” at the Salina plant. “I’m the one they call when something isn’t working right, and I get it fixed,” Cody said.

Chad joined the U.S. Navy in 1993. Over the next four years, he had two deployments. He served on the USS George Washington aircraft carrier in the Mediterranean Sea, and also in the Persian Gulf and Adriatic Sea, where his team monitored the no-fly zones over Bosnia and Kuwait. After his discharge in May 1997, Chad joined the company in July 1997 as an operator at the Kansas City, Kansas, plant.

Rivers of Recovery is an innovative, national nonprofit that uses outdoor-based activities to effectively treat symptoms of post-traumatic stress, depression, and anxiety in combat veterans and active duty military.